Sweet Carolina Doodles puppies are started on NuVet Plus Vitamins daily at 6 weeks of age. We highly recommend this vitamin for your new puppy. Every dog gets a NuVet vitamin everyday. I swear by them and think they are the reason we only see the Vet for routine care.

VITAMINS WE USE AND RECOMMEND!

Check out the video to learn more about NuVet Plus Vitamins.

HOW TO ORDER NUVET VITAMINS

You cannot purchase NuVet Vitamins in a pet store. They must be ordered online or by calling. Your puppy kit will come with a 6-day supply. You will need to order these before your puppy comes home. It takes about a week to get them.
Order your Nuvet Plus Vitamins by Phone: Call 1-800-474-7044. Please use order code 44157 when ordering by phone.
ORDER NUVET VITAMINS ONLINE 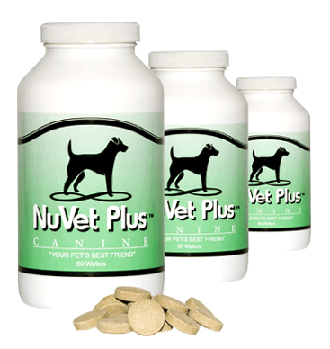 WHY SHOULD I GIVE MY PET NUVET?

NuVet scientists, veterinarians and formulators began with the premise that most pet diets are lacking the proper amounts of vitamins, minerals and antioxidants. There are important nutrients that animals once received when they were living in a more primitive environment that are not available in the modern diet. Commercial pet foods contain numerous by-products that can make them poisonous, toxic and incapable of reducing the devastating effects of unstable oxygen molecules, also known a free radicals. Free radicals have been implicated in more than fifty health problems in humans and animals including various forms of cancer, heart disease, arthritis, cataracts and premature aging.
Major considerations in formulating NuVet Plus® were the human grade quality of ingredients and their nutritional values, as well as the bio digestibility and utilization into the cellular framework. We also considered the chemicals and toxins that find their way into our animals' food. NuVet Plus® was formulated to combat these harmful pollutants.
NuVet Labs® has designed a cutting edge formula that we believe will help increase your pet's longevity and quality of life. Our scientists performed extensive research and experiments with a variety of vitamins, minerals, enzymes and herbs, until they created NuVet Plus®, which provides a powerful synergistic defense against the harm caused by free radicals.
NuVet Plus is independently tested and recommended by leading veterinarians. They are made from human-grade, natural ingredients and formulated over a period of 8 years by physicians, veterinarians, pharmacists, and animal nutritionists.

Studies show that feeding your dog NuVet can significantly reduce the risk or eliminate many problems that can strike your pet, including...